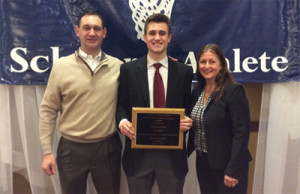 Luther is a true student athlete. He played point guard for the Blue Devils the past four years, averaging 19.1 points, seven rebounds and five assists this season. He is a member of the National Honor Society and has been named to Columbia’s Principal’s List every quarter of his high school career.

Luther has received early admission from Boston College, Villanova, Siena College and the University at Albany.