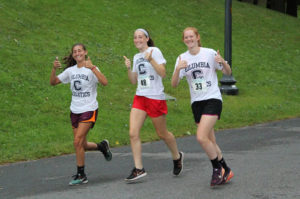 Out of 785 member high schools across the state, Columbia is one of two to receive the award this year, along with West Genesee High School from Section 3. Recipients are selected based on extra programs and activities that schools have implemented to promote positive sportsmanship.

“Receiving this award speaks volumes about the great coaches, students, parents and community that we have here in East Greenbush,” said Columbia Athletic Director Michael Leonard. “It’s very exciting to be honored five years in a row. I believe sportsmanship projects and activities are a major key in developing a positive culture in our athletic program, school and community. It also teaches many valuable lessons to all of our student athletes.” 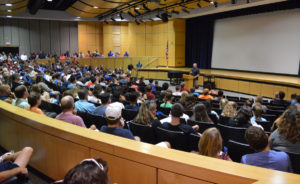 Athletic Director Michael Leonard speaks to student athletes and their families about sportsmanship at Meet the Coaches Night.

Mr. Leonard will accept the Sportsmanship Promotion Banner Award at a recognition luncheon in July.

“On behalf of the Association we congratulate our winning schools and applaud them for the efforts they have made to promote positive sportsmanship,” said Robert Zayas, NYSPHSAA Executive Director. “We are proud to have schools like Columbia and West Genesee set an example and standard for how sportsmanship should be emphasized in communities. We thank them for their efforts, proactive approach and successful implementation of sportsmanship programs in their schools and communities.”