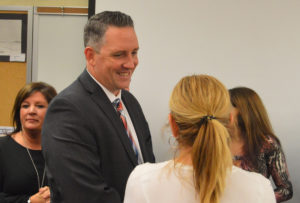 Michael Harkin was officially welcomed into the East Greenbush Central School District on Wednesday evening when he was appointed Columbia High School’s next principal at a special Board of Education meeting.

He will start on December 29, succeeding Principal John Sawchuk who is retiring.

Mr. Harkin is currently the principal of Knickerbacker Middle School in the Lansingburgh Central School District. He met with Mr. Sawchuk at Columbia earlier on Wednesday and plans to visit three more times before his official start date so he can become more familiar with the school and staff.

“I’m really looking forward to getting to work,” said Mr. Harkin, who was joined by his family at the meeting. “I want to thank the Board of Education, Superintendent Simons and the interview committee for giving me this opportunity.”

Mr. Harkin has 12 years of administrative experience as a principal and athletic director. He has served as principal of Knickerbacker Middle School since 2014. Prior to that position, he was the director of physical education and athletics at Lansingburgh from 2007-14 and director of athletics at Brunswick (Brittonkill) Central School District from 2005-07.

“Mr. Harkin has a record of success and background in educational leadership which will enable Columbia High School to ensure all of our graduates are college and career ready,” said Superintendent Jeff Simons. “We welcome Mike to our team!”