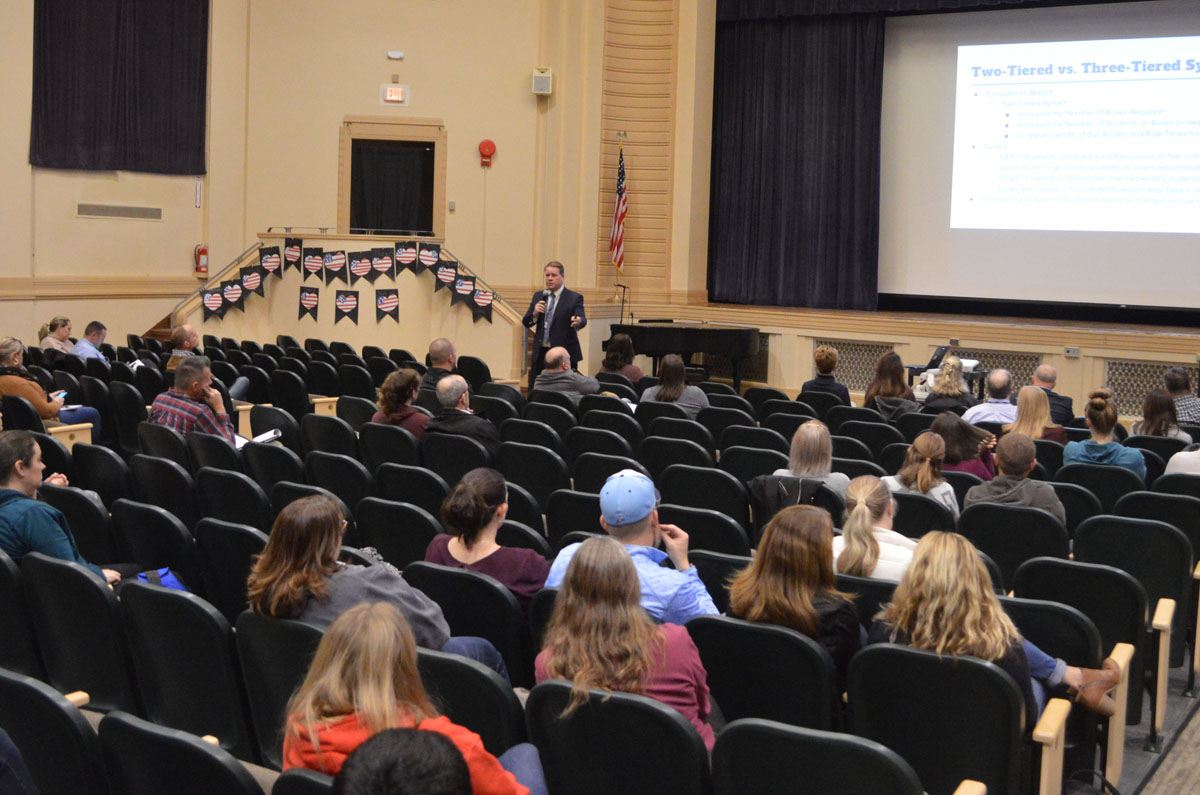 The East Greenbush Central School District hosted its first of three community meetings on Tuesday evening in the Genet Elementary School auditorium to discuss school start times and the impacts that a potential change could have on students, families and staff.

Superintendent Jeff Simons led the presentation, which provided background information, survey results, committee findings and a proposal that would adjust start and dismissal times at each school. He noted that no decisions have been made and that these public meetings are being held to gather more information from the community.

The district began studying the school start time topic in September 2018 by creating a committee comprised of school staff, parents, students, administrators and Board of Education members. The purpose of the study is to determine if scheduling options which may improve the general welfare of students are feasible and have the support of the school community.

At 7:10 a.m., Columbia High School currently has the earliest start time in the Capital Region. Students, parents and staff have expressed concern over this issue in recent years.

“I believe as a superintendent, that if there is a trend, if there’s research, if there’s issues we ought to be thinking about that could benefit our kids, we ought to have a conversation,” Mr. Simons told the audience of more than 100 people. “It does not mean at this time that the district is moving to implementation next year. We want to hear from the community and we want you to understand why we’re looking at this issue.”

“So this forum is truly a two-way communication,” he continued. “It’s an opportunity for me, and the committee that’s been working with me, to share the information that we’ve looked at and the options that may be available to our district. But any plan has to include the input of the community, and that’s why I’m so encouraged that all of you are here.”

During the presentation, Mr. Simons shared the School Start Time survey results from last December that had more than 1,700 total responses from three groups (K-12 parents, Columbia students and district staff). The survey showed support for later start times at the high school and middle school and an earlier start time at the elementary schools. There was not, however, support from parents and staff for a later elementary school start time, presumably because those schools already start on the later end at 9:00 a.m.

Mr. Simons shared that proposal with the audience, which would push back Columbia’s start time to 8:15 a.m. and Goff Middle School’s start time to 8:45 a.m. The elementary schools would be moved to a 7:30 a.m. start time to ensure the district could maintain its efficient three-tier bus system. (Under this system, school buses transport students to and from school in three different trips by school level.)

After the presentation, members of the audience were invited to gather in small discussion groups that were facilitated by School Start Time Committee members and elementary school principals. They also filled out survey cards so they could provide feedback on the proposal. 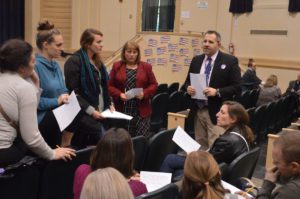 Genet Principal Wayne Grignon, who is on the School Start Time Committee, facilitates a group discussion about the school start time proposal.

The groups then asked questions and expressed concerns during a Q&A. Much of the discussion came from the perspective of elementary school parents, because that was the main audience for this particular public meeting. Some of the topics included after school child care with elementary students getting out of school at 2:00 p.m., those students needing to go to bed earlier at night because they would need to be up earlier in the morning and the overall impact this potential scheduling change could have on families.

At the end of the Q&A, Mr. Simons thanked the audience for their participation in this process. He also indicated that the School Start Time Committee would consider creating a new survey that includes this proposal and some more detailed questions related to the impacts it would have.

“I really appreciate all of your input about this issue,” Mr. Simons told the audience as the meeting concluded. “Again, I just want to offer assurances to you that all of the information that we have gathered from this discussion will be shared with the committee and we will continue to study it.”