Award-Winning Musician to Perform at Columbia 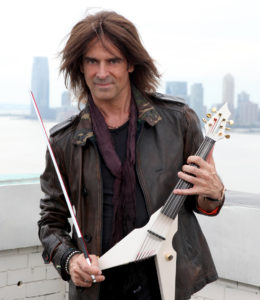 Mark Wood, an award-winning composer, international recording artist and electric violinist, will perform a concert for the public with all 240 East Greenbush orchestra students at Columbia High School on Saturday, February 4 at 7:00 p.m.

The concert follows a two-day workshop in which Mr. Wood will work with students.

Mr. Wood, who toured for many years with the Trans Siberian Orchestra, is widely acknowledged as the premier electric rock violinist of his generation. He studied under maestro Leonard Bernstein at Tanglewood and attended the Julliard School of Music on full scholarship. Mr. Wood has earned two platinum and three gold records. He has toured and performed with Billy Joel, Celine Dion, Lenny Kravitz and Roger Daltry.

As a composer, Mr. Wood won an Emmy award for the music he composed for the Tour de France and has received three additional Emmy nominations for a variety of film and television projects, most notably for the 1999 Winter Olympics opening show.

Tickets to the concert cost $10 for adults and $8 for students/seniors (65 years and older). Please order your tickets (see below for form) by January 25 as this show is expected to sell out.